I have seen a lot of YouTube videos on making alcohol inks and decided to give it a try.  I made a mess but they turned out great!

I looked all over for containers.  I didn't want to pay very much in case it didn't work out.  I saw, in the videos, they bought travel size containers at the dollar store.  The ones they got were a package of 3 for a dollar.  My store didn't have those and the ones at Walmart were a dollar each.  I figured the point of making them myself was to save money.  After searching all over Walmart I finally ended up in the party section.  I decided on the bubbles. There were 8 2oz. bottles for 3 bucks!  That was a great deal!  I got bubbles and little containers :).  I saved the bubbles in a different container for my grandsons.  I figure it was a win win lol.  I looked online at Walmart.com but they didn't have these.  Just pick them up in the party section where they have all the kid's party supplies. 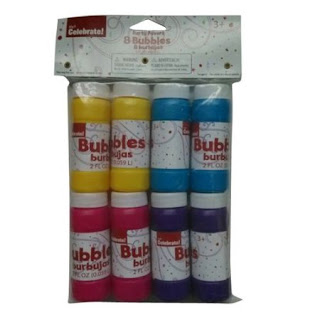 I also picked up some Sharpies from Walmart. 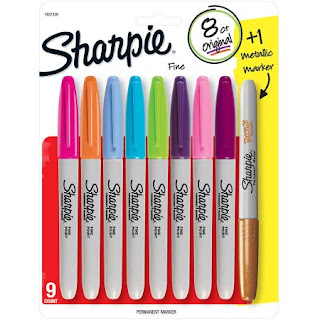 I wasn't as lucky to get the metallic marker though.  I used 2 markers per bottle.  I tried previously and used one marker for 2 oz of alcohol and it wasn't bright enough for me.  You could try it and see if it is something you like.  I just wanted mine more saturated.

Next thing you need is some rubbing alcohol.  I got 91% because that is what others have used.  The first one I tried I used 70%.  I also saw a comment from someone on a video that they used 50%. The 50% comment said it dried slower so it was easier for them to play with.  I am not sure if it makes a difference on the percentage.  Might just be personal preference.

To start with use the pliers and pull the nib out of the sharpie.  Stick it in the empty bottle.  Next you are going to use the pliers and grab the marker where the color meets the gray part of the marker.  Wiggle back and forth until it comes apart.  It will be a little hard.  If you can't get it then squeeze really hard and wiggle it comes off easier.

Next take the ink thingy out.  You will want gloves for this.  For safety purposes use the needle nose pliers to hold the ink thing and then use the razor to cut down the center to expose the middle fluff.  Don't squeeze too hard or you will squeeze the ink out.  After doing mine I was thinking it would be easier to cut it open in something bigger that you could also mix the alcohol in.  That way you wouldn't waste any of the ink.  If you do it that way you could put the ink in and the alcohol, mix it up and pour into the bottle.  The way I did it was open the ink thingy and stick it in the bottle.  I actually used 2 sharpies per bottle.  I then filled it with the alcohol to the top.  Put the lid on and just shake every once in a while.

I had it sit for a few hours before I tested it out.  It turned out amazing! 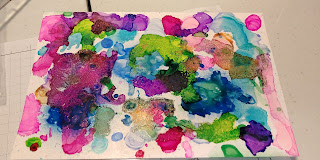 I wasn't trying to create anything.  Just testing the colors. 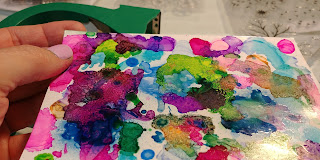 I just plan on leaving the ink thingy in the bottles.  I figure no need to take them out. 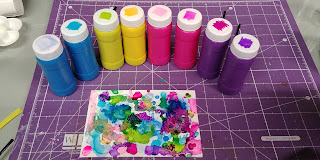 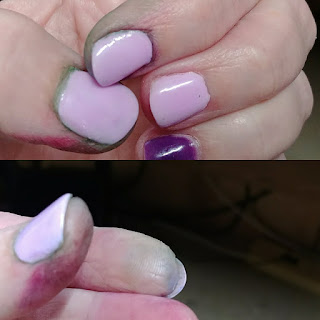 You might want to make sure you wear gloves if you don't want to mess up your manicure lol.

Here is a breakdown for cost comparison.

Hope you try it out and enjoy!
Posted by Unknown at 9:44 PM

Disclaimer: This blog post contains affiliate links. I may earn a small commission to fund my coffee drinking habit if you use these links to make a purchase. You will not be charged extra, and you’ll keep me supplied in caffeine. It’s a win for everyone, really.
I am also a participant in the Amazon Services LLC Associates Program, an affiliate advertising program designed to provide a means for me to earn fees by linking to Amazon.com and affiliated sites.